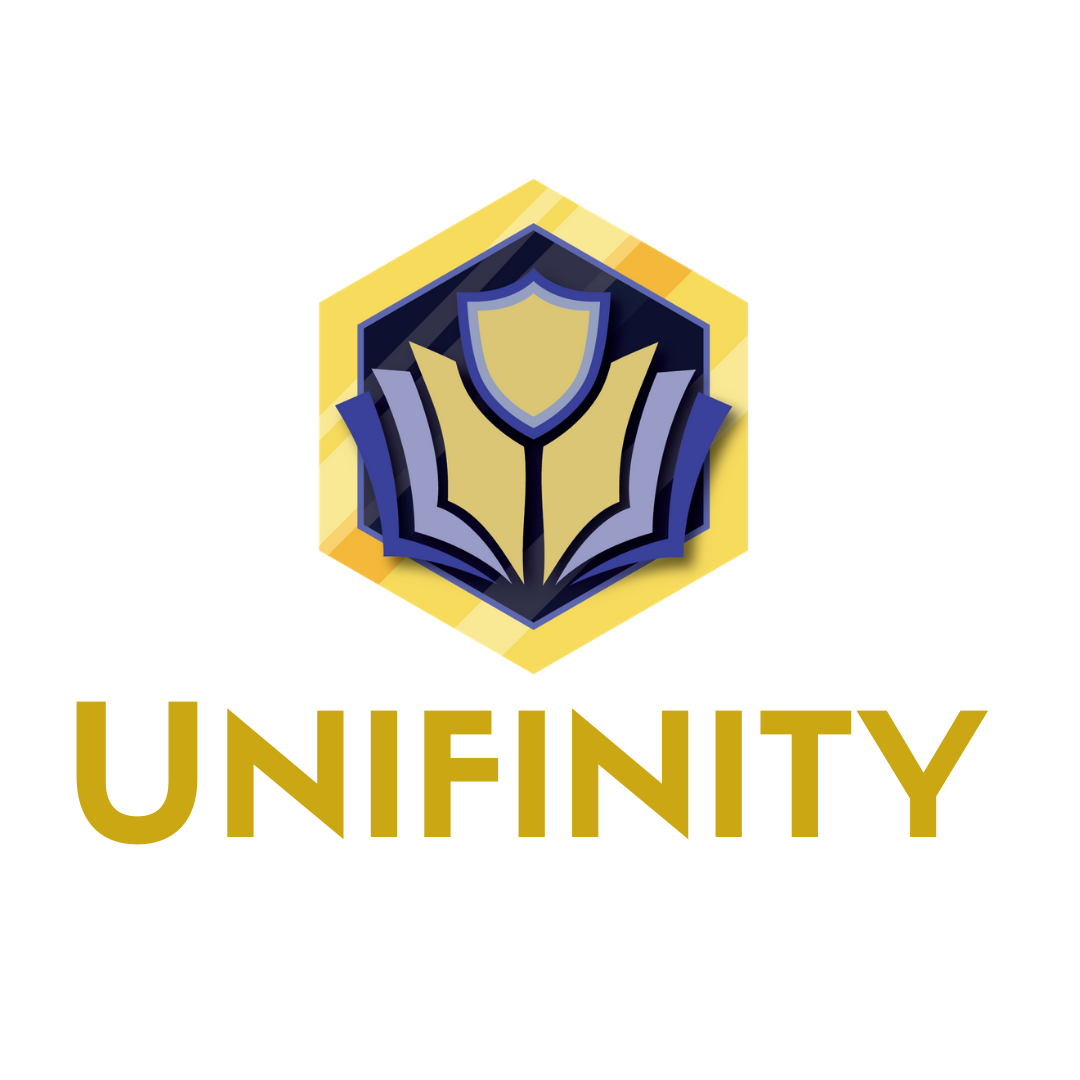 Be an Early Contributor !

In a world where instant gratification is becoming a norm, real-time incentivization and rewards mechanisms like this might prove to be invaluable tools to help students excel in school.  UNY Credits will make every Student , Parents , Teachers Dream Come true! 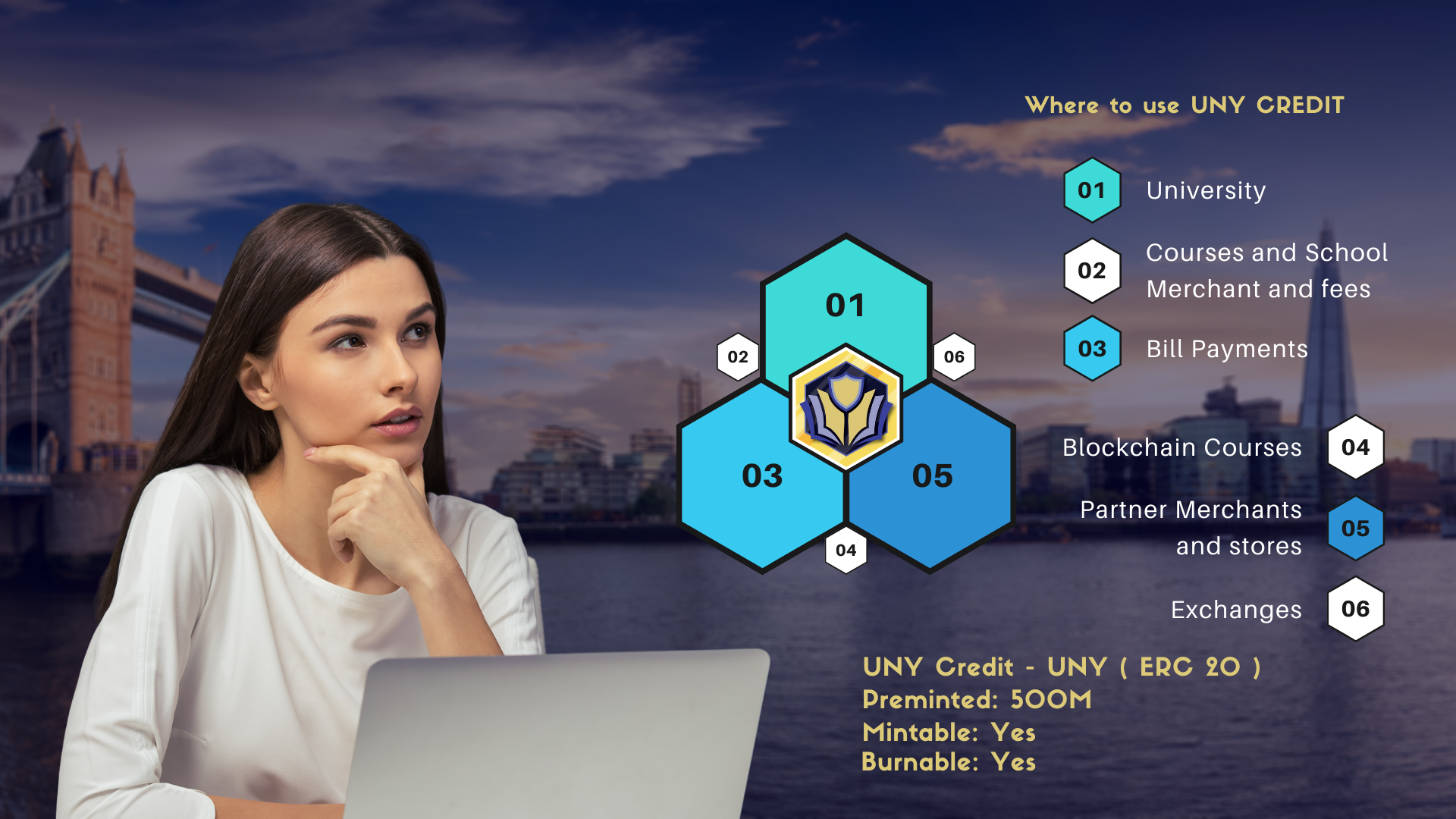 UNY Credits will provide a faster, cheaper, safer, and more accessible alternative payment that provudes the Parents and Schools accessibility. There are no bank holidays on crypto, no intermediaries with additional fees and senders (parents or patrons) will be able to monitor real-time information about the movement of their money. It also introduces new dynamics to how students can get funding for their education.

Education institutions will have the ability to use Unifinity UNY Credits for grants or voucher-based funder to help deserving students who may not have the financial capacity to pay for their education.  Smart contract-powered vouchers can be programmed to release tranches of funding to either the student or the educational institution when certain hardcoded conditions are met. This will be self-executing, cutting through the inefficiencies of bureaucracies within the educational institution.

One of the most exciting features for students that will be integrated into Unifinity’s platform is the innovative ways students will be rewarded and incentivized to perform well in school. Dream Planner Portal serves as an incentivization and rewards mechanism where donors, sponsors, school supporters (alumni,  PTA organizations, NGOs, scholarships and etc) and future employers can help students reach their full potential. Your keys, your coins. When you generate a wallet with unywallet, your wallet is generated on your browser’s end. No data is ever stored on our servers. Remember to backup your keys!

No software downloads or installations are ever required. Unywallet is 100% browser-based and multi-device supported. Access your wallet freely regardless of where you are and whatever devices you are using.

Bitcoin, Ethereum and some ERC20 tokens are supported on Unywallet.

Learn More About Unywallet & How It All Works

Over $1 Billion+ were lost up until today as a result of hacking incidents on centralized wallets and exchanges. Transparency is never always guaranteed with centralized services. Hence, many avid cryptocurrency users are quickly shifting away from centralized services to decentralized/non-custodial platforms.

Another reason is the hectic fees involved with centralized services. Market makers/takers are usually charged around 0.1% for each exchange activity and there are deposit/withdrawal fees involved. Remember, we are not here to sell anything and we charge 0 fees for any of the services we offer. We have simply created this decentralized wallet + p2p exchange because we are passionate about bringing solutions to the existing problems within the industry. By using Bitcoin.js, web3.js and the libp2p library in IPFS, we allow users to seamlessly swap coins and tokens (cross-chain) directly with one another without any 3rd parties involved & without any fees involved.

Many centralized services additionally require you to complete KYC as funds are received directly into their wallets. We do not require users to verify their identifications as we do not handle your funds nor do we store your data anywhere with us. Nobody can freeze or suspend your account or funds and prevent you from performing transactions. It’s the way it should have been and will always be.

What does it mean by non-custodial/decentralized?

Decentralized is another way of describing a non-custodial platform. This simply means that there are no 3rd parties involved in storing and swapping your coins and tokens. No data or information about you is ever recorded, passed, and cached on our servers. When you create a new wallet on Unywallet, you are creating a wallet 100% on your end, via your browser. This means if you lose your private keys (or forget to save them), you will lose your funds permanently as nobody else keeps these data/information.

What does it mean by atomic swaps and how does it work?

Atomic swap is a peer-to-peer exchange of cryptocurrencies from one party to another, without going through a third party service like a crypto exchange. During this entire process, the users have full control and ownership of their private keys. For more information, read this ARTICLE (CLICK).

The orderbook itself is decentralized as we keep no records of users and no data on our servers. Each user stores orders and sends them in the form of data to other users via the IPFS pub sub network – which is based on the principles of IRC (Internet Relay Chat), an application-level protocol for real-time messaging.

How are orders created?
1. The user selects a pair in the interface and indicates the amount he/she wants to sell (amount should be available on the wallet).
2. User’s browser creates a message based on the protocol, signs it with the user’s private key (for identification) and sends it to the IPFS pub sub network
3. Other users receive this message via their browsers and adds the order to their local copy of the order book.
4. If someone wants to execute the order, this message is sent directly to the creator of the order only.

When the order maker & taker are matched, the actual time taken for swaps do not take any longer than 10 minutes (assuming that both parties have enough funds on their wallets). For example, BTC<>ETH typically takes less than 40 seconds to receive ETH and up to 3 minutes to receive BTC.

All coin-coin and coin-token swaps are conducted “on-chain” with the help of our decentralized orderbook via IPFS feature + reputation system + atomic swap solutions.

What are the fees?

It is free to generate/import/export wallets. There are 3.5% fees involved with using the built-in exchange. Additional miners fees may be charged (transaction fees). These fees are not charged by us but rather applied on all Ethereum transactions by the Ethereum network.

There are no KYC requirements for Unywallet. We do not take custody of funds or private keys at any point in time during the trading process. All atomic swaps are done peer-to-peer against a set of public smart contracts that can be audited by anyone.

Which assets are supported?

Currently, we only support Bitcoin (BTC) and Ethereum (ETH) as well as some Ethereum-based ERC20 Tokens.

Unywallet is a protocol allowing cross-chain swap of cryptocurrencies without the need for an intermediary party. Implementation is done with JS & the use of IPFS.

DECENTRALIZED WALLET: Completely Decentralized Cryptocurrency Wallet. No intermediary parties involved. Your coins, Your keys.
BROWSER-BASED: No more software downloads or installs. Use the browser or the chrome extension to power your wallet.
ATOMIC SWAPS: Connecting multiple blockchains & enabling users to exchange coins directly with other connected peers.
IPFS POWERED: Orders are recorded and activated directly on the IPFS. Orders are activated & deactivated as you turn your browser on/off.
IMPORT/EXPORT: Import or Export your wallets as you wish. Enjoy complete control over your funds. No restrictions, no fees.

Hash function: a function conforming to the following conditions:
If x is known, then f(x) is relatively easy to calculate.
If y=f(x) is known, there is no simple (efficient) way to calculate x.
Example of the function , where mod is the remainder after division by N.

Order: a message which indicates that the user wishes to trade ‘X’ for ‘Y’. In this case, the swap (exchange) only begins when other users ‘subscribe’ to the orders and their conditions are met.

Swap: an exchange procedure whereby X is traded for Y and vice versa in a simultaneous and irreversible way.

Smart contract: specifically conditioned address on the blockchain with funds locked only until the specific condition has been met.

** Maker to All: I want to exchange 1 BITCOIN for 10 ETH (place order) (signed with a private key with a condition that a penalty of $100 is to be paid upon refusal)
** Taker to Maker: Let’s exchange
The Maker fills the bitcoin script with the condition that only T may unlock it upon sending the x value conforming to the condition y=f(x) to the script; the script contains the y value.
** Maker to Taker: I have frozen bitcoins at the address {ContractBTCaddress}, sending the Y value now
The Taker creates and fills a similar contract in the Ethereum network stating the same Y value
** Taker to Maker: Here is the contract in the Ethereum network {ContractETHaddress}
The Maker takes ETH out of {ContractETHaddress} by transferring the X value there
The Taker takes bitcoins from {ContractBTCaddress} by transferring the X value there
The Maker is unable to take money out of {ContractBTCaddress} until the timeout expires, and vice versa.

The parties check whether the smart contract is created and filled properly by the other party before taking any actions.

Wallet
Upon first logging in to the wallet, cryptocurrency addresses and its corresponding private keys are generated for the user. The user can then proceed to import/export private keys, deposit, withdraw, view transaction history, and place swap orders.

Orderbook
The orderbook (for swaps) mimics a mini-blockchain whereby all parties will actively keep a copy of the orderbook.

Transport: IPFS
Data are stored in a distributed network based on IPFS pub sub, and in this case the only point of failure is the signal server; furthermore, several such servers may be added.

Liquidity: bots
The protocol allows exchanging cryptocurrency directly from other addresses; users do not have to keep a reserve on the stock exchange. The user may keep reserves wherever he/she requires these reserves, for example, on other stock exchanges, and run them through the system only during the swap. Thus, we will not take liquidity from competitors and become an additional invisible layer.

Rating and pledge
*to be expanded*

It is not possible to implement all parts of the protocol technically, many aspects still depends on the user; therefore, a rating or other additional data to filter users are required.

Rating example: Each exchange increases statistics for the volume and quantity of transactions, with the drawback that it keeps Ethereum-related transactions, but this means 95% of all tokens.

Pledge example: The market maker puts a pledge into the smart contract which is reduced if he/she agrees for transactions and later cancels them.

Rating data may be stored off-chain; each user keeps the exchange history with signatures from the other party, which allows uploading it into the blockchain at any time to obtain rating points.

Token (example)
A token is a pledge for the green status;
The user transfers the token into the smart contract, and his/her address becomes green in the system which can be seen by all protocol participants;
If one party aborts the transaction, part of his/her tokens will be transferred to another user;
Therefore, the system encourages correct behaviour, when the expected value is positive; it is not an investment income;
If desired, the participant may withdraw excess tokens;
The token holders may, upon a general vote, establish a fee for all transactions with tokens and a purpose of use (stating the address);
We cannot affect the protocol operation in any way but may choose what information should be displayed on the website. 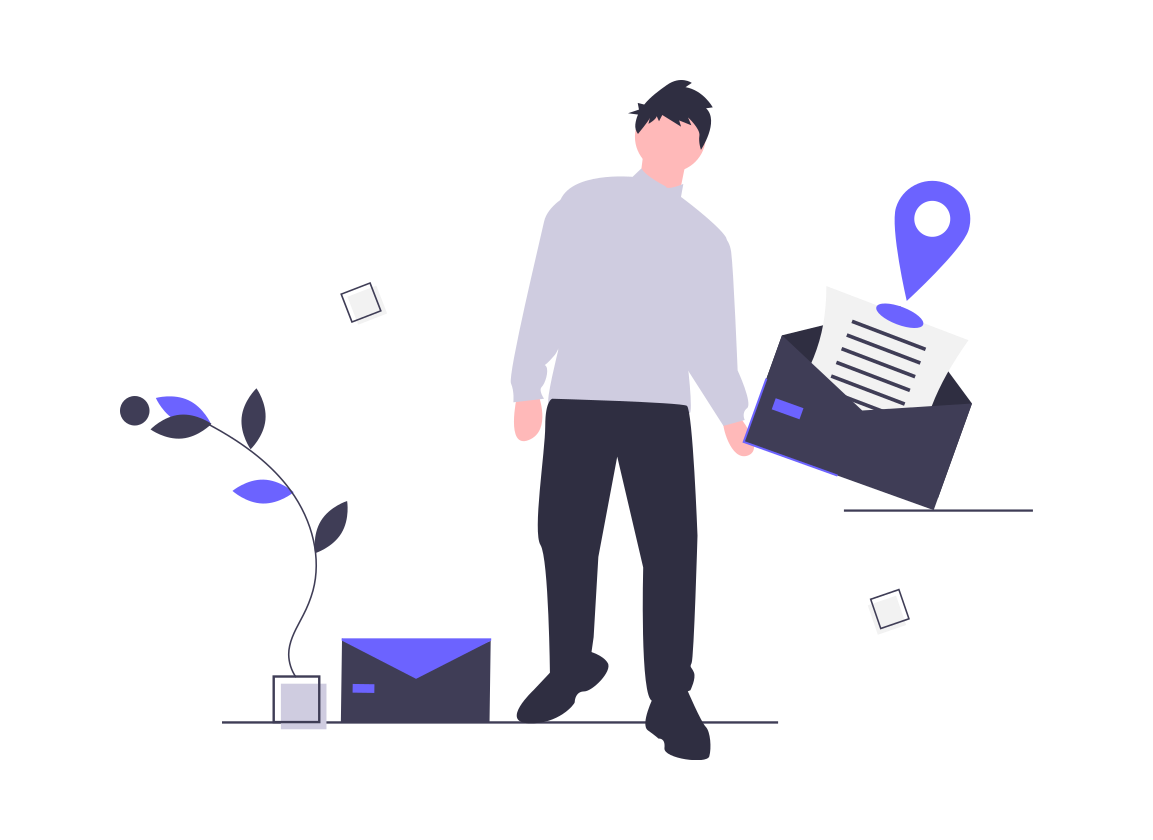 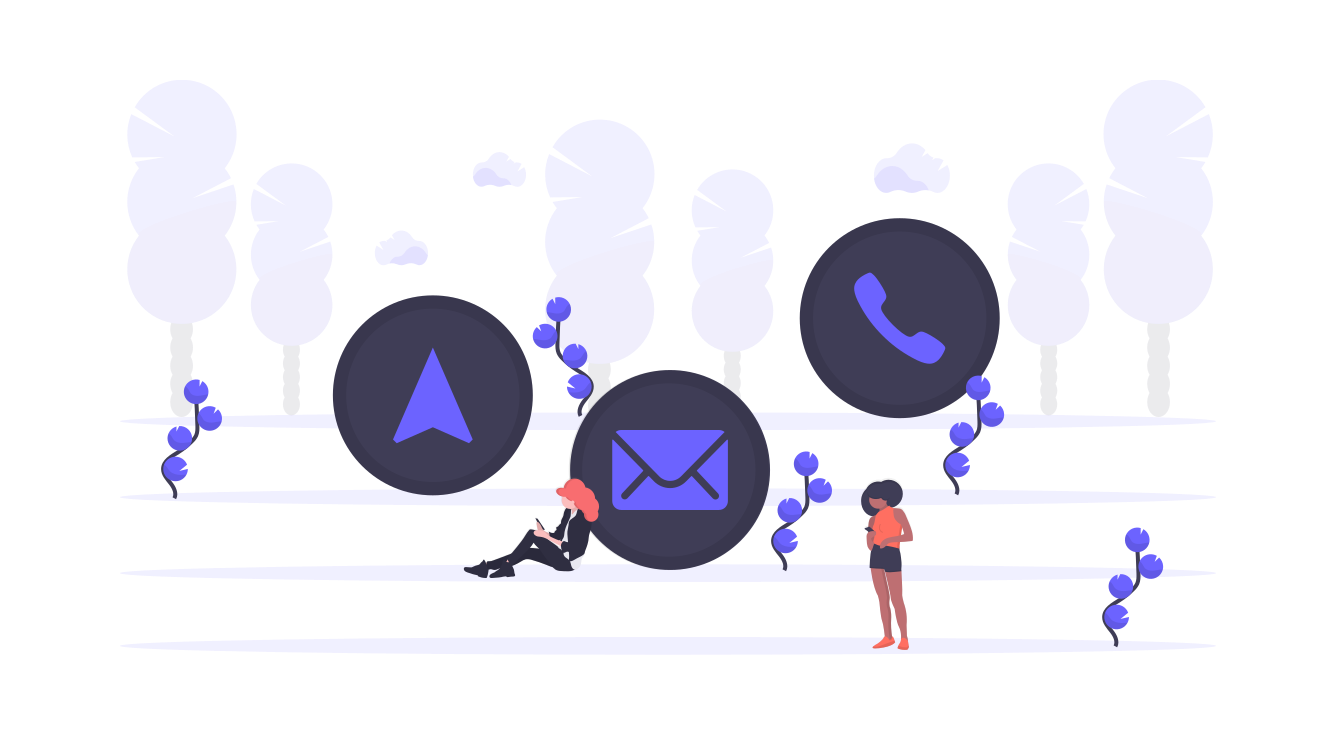 Let us know how we can help!